The Research Institute was established in Prague in 1921. In 1953 it was moved to the town of Vodňany in South Bohemia. Since 1996 it has been part of the University of South Bohemia in České Budějovice.

About Laboratory of Germ Cells 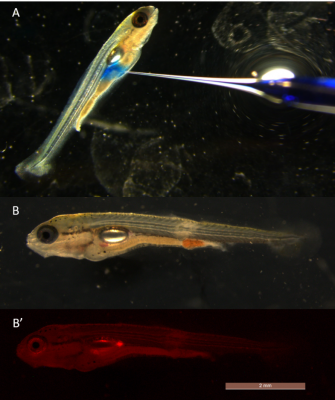 The researchers of the germ cell laboratory have attained several achievements in sturgeon research, where we can mention successful nuclear transfer, elucidation of the polyspermy phenomenon, description of specification and migration of primordial germ cells, as well as freezing and subsequent transplantation of germ stem cells. One of the long-term goals of the laboratory is transplantation of germ cells from late-maturing sturgeon species into the small and short maturing sterlet host, which is expected to significantly reduce length of the reproductive cycle. In course of this long-term effort, several techniques of non-transgenic and transgenic sterilization of sterlet have been developed for this purpose.

Fig. 2. Electron microscope captions on sturgeon egg having several micropyles (B), with detailed view on one micropyle with three spermatozoon, which is attributed to polyspermic fertilization resulting in atypical cleavage patterns captured on figure 3.

Fig. 3. Atypical cleavage patterns in sterlet polyspermic embryos (A and B), resulting in the formation of three blastomeres, which further cleave and can give to viable individual composed of different parents. Under normal conditions, control embryo (C) is following normal cleavage pattern 2-4-8-16 cells.

Current research topics on sturgeons in the laboratory are aimed on the molecular characterization of germ cells in juvenile individuals, which can bring new insights into sex determination and development. Cell sorting and in vitro cell culture then followed by RNA sequencing is used for this purpose. Beside sturgeon germ cell, the development of endoderm and the fate of the yolk cells in archaic fish species are studied, because their show very unique patterns. 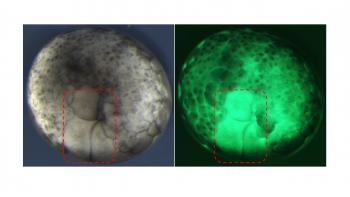 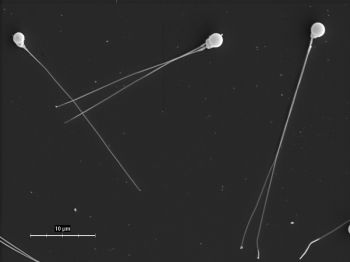 Fig. 6. Caption of spermatozoa obtained from carp x gibel carp hybrid using scanning electron microscope. Left spermatozoon is normal, having one flagellum, while spermatozoa on the righ are abnormal having two flagellum.

The laboratory has two recirculation zebrafish systems for the breeding where several zebrafish transgenic lines are maintained and used for the study of germ cells through various transplantation methods, but also to study lipid metabolism via gene knockout. Zebrafish breeding colony also serves as a model for preliminary studies to be carried out in sturgeons. At the same time, laboratory members provide support to colleagues from other laboratories who conduct experiments on zebrafish. The laboratory also uses capacity of the aquarium room located at Genetic Fisheries Centre, where goldfish germline chimera producing common carp gametes are reared. Researches do not neglect less traditional and less-known fish species, such as loach, which offers unique opportunity to study sexual and asexual reproduction on the molecular level.

Fig.7. Gamete collection from zebrafish male (A) and female (B).

Fig. 8. Zebrafish embryos microinjection with dye (A), detectable only under fluorescent light (B, C). 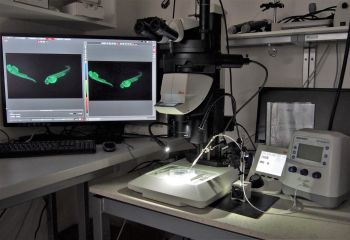 Fig. 10. Robotized fluorescent stereomicroscope with micromanipulator and microinjector for manipulation with fish embryos. 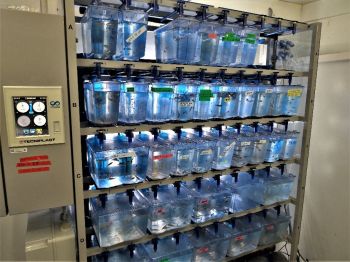